Fonts at the Web Engines Hackfest 2016

Last week I travelled to Galicia for one of the regular gatherings organized by Igalia. It was a great pleasure to meet again all the Igalians and friends. Moreover, this time was a bit special since we celebrated our 15th anniversary :-) 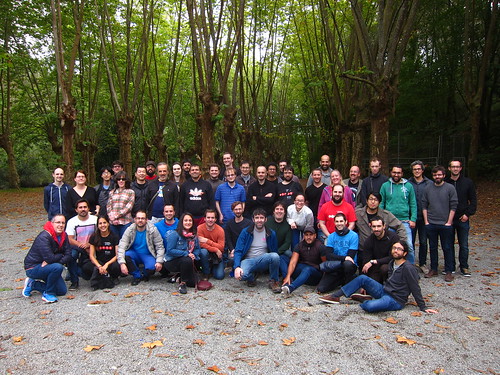 I also attended the third edition of the Web Engines Hackfest, sponsored by Igalia, Collabora and Mozilla. This year, we had various participants from the Web Platform including folks from Apple, Collabora, Google, Igalia, Huawei, Mozilla or Red Hat. For my first hackfest as an Igalian, I invited some experts on fonts & math rendering to collaborate on OpenType MATH support HarfBuzz and its use in math rendering engines. In this blog post, I am going to focus on the work I have made with Behdad Esfahbod and Khaled Hosny. I think it was again a great and productive hackfest and I am looking forward to attending the next edition! 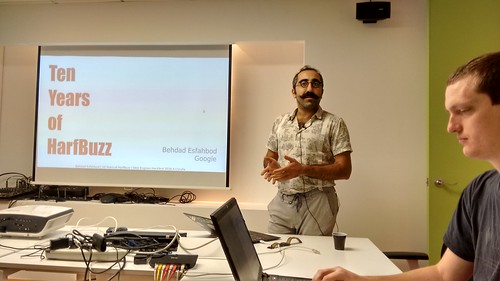 Behdad gave a talk with a nice overview of the work accomplished in HarfBuzz during ten years. One thing appearing recently in HarfBuzz is the need for APIs to parse OpenType tables on all platforms. As part of my job at Igalia, I had started to experiment adding support for the MATH table some months ago and it was nice to have Behdad finally available to review, fix and improve commits.

When I talked to Mozilla employee Karl Tomlinson, it became apparent that the simple shaping API for stretchy operators proposed in my blog post would not cover all the special cases currently implemented in Gecko. Moreover, this shaping API is also very similar to another one existing in HarfBuzz for non-math script so we would have to decide the best way to share the logic.

As a consequence, we decided for now to focus on providing an API to access all the data of the MATH table. After the Web Engines Hackfest, such a math API is now integrated into the development repository of HarfBuzz and will available in version 1.3.3 :-)

Currently, several math rendering engines have their own code to parse the data of the OpenType MATH table. But many of them actually use HarfBuzz for normal text shaping and hence could just rely on the new math API the math rendering too. Before the hackfest, Khaled already had tested my work-in-progress branch with libmathview and I had done the same for Igalia’s Chromium MathML branch. 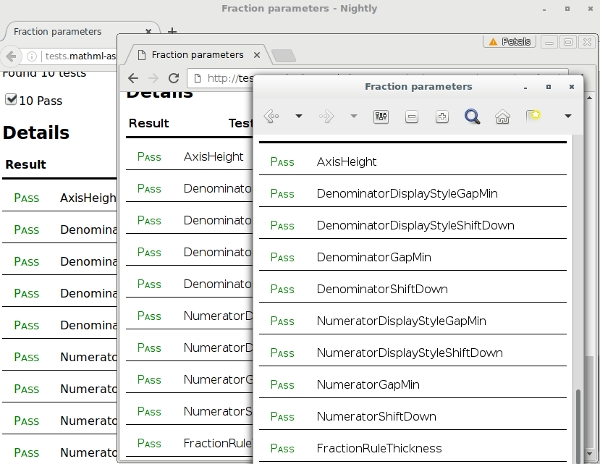 Once the new API landed into HarfBuzz, Khaled was also able to use it for the XeTeX typesetting system. I also started to experiment this for Gecko and WebKit. This seems to work pretty well and we get consistent results for Gecko, Blink and WebKit! Some random thoughts: 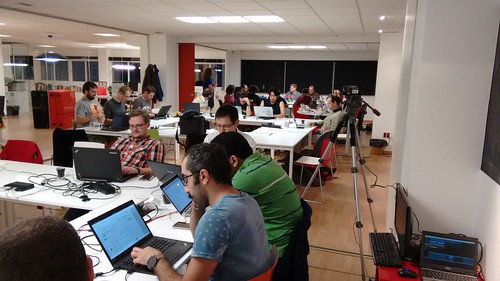 We also updated the copies of WOFF2 and OTS libraries in WebKit and Gecko respectively. This improves one requirement from the WOFF2 specification and allows to pass the corresponding conformance test.

Gecko, WebKit and Chromium bundle their own copy of the Brotli, WOFF2 or OTS libraries in their source repositories. However:

There are several issues that make hard for package maintainers to provide these libraries: no released binaries or release tags, no proper build system to generate shared libraries, use of git submodule to include one library source code into another etc Things have gotten a bit better for Brotli and I was able to tweak the CMake script to produce shared libraries. For WOFF2, issue 40 and issue 49 have been inactive but hopefully these will be addressed in the future…