The AMP Project and Igalia have recently been collaborating to improve WebKit’s implementation of the Web platform. Both teams are committed to make the Web better and we expect that all developers and users will benefit from this effort. In this blog post, we review some of the bug fixes and features currently being considered:

Some demo pages for frame sandboxing and scrolling are also available if you wish to test features discussed in this blog post.

AMP is an open-source project to enable websites and ads that are consistently fast, beautiful and high-performing across devices and distribution platforms. Several interoperability bugs and missing features in WebKit have caused problems to AMP users and to Web developers in general. Although it is possible to add platform-specific workarounds to AMP, the best way to help the Web Platform community is to directly fix these issues in WebKit, so that everybody can benefit from these improvements.

Igalia is a consulting company with a team dedicated to Web Platform developments in all open-source Web Engines (Chromium, WebKit, Servo, Gecko) working in the implementation and standardization of miscellaneous technologies (CSS Grid/flexbox, ECMAScript, WebRTC, WebVR, ARIA, MathML, etc). Given this expertise, the AMP Project sponsored Igalia so that they can lead these developments in WebKit. It is worth noting that this project aligns with the Web Predictability effort supported by both Google and Igalia, which aims at making the Web more predictable for developers. In particular, the following aspects are considered:

Below we provide further description of the WebKit improvements, showing concretely how the above principles are followed.

A sandbox attribute can be specified on the iframe element in order to enable a set of restrictions on any content it hosts. These conditions can be relaxed by specifying a list of values such as allow-scripts (to allow javascript execution in the frame) or allow-popups (to allow the frame to open popups). By default, the same restrictions apply to a popup opened by a sandboxed frame.

Figure 1: Example of sandboxed frames (Can they navigate their top frame or open popups? Are such popups also sandboxed?)

However, sometimes this behavior is not wanted. Consider for example the case of an advertisement inside a sandboxed frame. If a popup is opened from this frame then it is likely that a non-sandboxed context is desired on the landing page. In order to handle this use case, a new allow-popups-to-escape-sandbox value has been introduced. The value is now supported in Safari Technology Preview 34.

While performing that work, it was noticed that some WPT tests for the sandbox attribute were still failing. It turns out that WebKit does not really follow the rules to allow navigation. More specifically, navigating a top context is never allowed when such context corresponds to an opened popup. We have made some changes to WebKit so that it behaves more closely to the specification. This is integrated into Safari Technology Preview 35 and you can for example try this W3C test. Note that this test requires to change preferences to allow popups.

It is worth noting that web engines may slightly depart from the specification regarding the previously mentioned rules. In particular, WebKit checks a same-origin condition to be sure that one frame is allowed to navigate another one. WebKit always has contained a special case to ignore this condition when a sandboxed frame with the allow-top-navigation flag tries and navigate its top frame. This feature, sometimes known as “frame busting,” has been used by third-party resources to perform malicious auto-redirecting. As a consequence, Chromium developers proposed to restrict frame busting to the case where the navigation is triggered by a user gesture.

According to Chromium’s telemetry frame busting without a user gesture is very rare. But when experimenting with the behavior change of allow-top-navigation several regressions were reported. Hence it was instead decided to introduce the allow-top-navigation-by-user-activation flag in order to provide this improved safety context while still preserving backward compatibility. We implemented this feature in WebKit and it is now available in Safari Technology Preview 37.

Finally, another proposed security improvement is to use an allow-modals flag to explicitly allow sandboxed frames to display modal dialogs (with alert, prompt, etc). That is, the default behavior for sandboxed frames will be to forbid such modal dialogs. Again, such a change of behavior must be done with care. Experiments in Chromium showed that the usage of modal dialogs in sandboxed frames is very low and no users complained. Hence we implemented that behavior in WebKit and the feature should arrive in Safari Technology Preview soon.

Check out the frame sandboxing demos if if you want to test the new allow-popup-to-escape-sandbox, allow-top-navigation-without-user-activation and allow-modals flags.

Apple’s UI choice was to (almost) always “flatten” (expand) frames so that users do not require to scroll them. The rationale for this is that it avoids to be trapped into hierarchy of nested frames. Changing that behavior is likely to cause a big backward compatibility issue on iOS so for now we proposed a less radical solution: Add a heuristic to support the case of “fullscreen” iframes used by the AMP Project. Note that such exceptions already exist in WebKit, e.g. to avoid making offscreen content visible.

We thus added the following heuristic into WebKit Nightly: do not flatten out-of-flow iframes (e.g. position: absolute) that have viewport units (e.g. vw and vh). This includes the case of the “fullscreen” iframe previously mentioned. For now it is still under a developer flag so that WebKit developers can control when they want to enable it. Of course, if this is successful we might consider more advanced heuristics.

The fact that frames are never scrollable in iOS is an obvious interoperability issue. As a workaround, it is possible to emulate such “scrollable nodes” behavior using overflow: scroll nodes with the -webkit-overflow-scrolling: touch property set. This is not really ideal for our Web Predictability goal as we would like to get rid of browser vendor prefixes. Also, in practice such workarounds lead to even more problems in AMP as explained in these blog posts. That’s why implementing scrolling of frames is one of the main goals of this project and significant steps have already been made in that direction.

The (relatively complex) class hierarchy involved in frame scrolling is summarized in Figure 2. The frame flattening heuristic mentioned above is handled in the WebCore::RenderIFrame class (in purple). The WebCore::ScrollingTreeFrameScrollingNodeIOS and WebCore::ScrollingTreeOverflowScrollingNodeIOS classes from the scrolling tree (in blue) are used to scroll, respectively, the main frame and overflow nodes on iOS. Scrolling of non-main frames will obviously have some code to share with the former, but it will also have some parts in common with the latter. For example, passing an extra UIScrollView layer is needed instead of relying on the one contained in the WKWebView of the main frame. An important step is thus to introduce a special class for scrolling inner frames that would share some logic from the two other classes and some refactoring to ensure optimal code reuse. Similar refactoring has been done for scrolling node states (in red) to move the scrolling layer parameter into WebCore::ScrollingStateNode instead of having separate members for WebCore::ScrollingStateOverflowScrollingNode and WebCore::ScrollingStateFrameScrollingNode.

The scrolling coordinator classes (in green) are also important, for example to handle hit testing. At the moment, this is not really implemented for overflow nodes but it might be important to have it for scrollable frames. Again, one sees that some logic is shared for asynchronous scrolling on macOS (WebCore::ScrollingCoordinatorMac) and iOS (WebCore::ScrollingCoordinatorIOS) in ancestor classes. Indeed, our effort to make frames scrollable on iOS is also opening the possibility of asynchronous scrolling of frames on macOS, something that is currently not implemented. 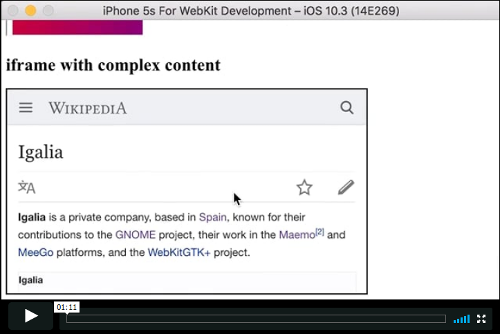 Figure 4: Video of this demo page on WebKit iOS with experimental patches to make frame scrollables (2017/07/10)

Finally, some more work is necessary in the render classes (purple) to ensure that the layer hierarchies are correctly built. Patches have been uploaded and you can view the result on the video of Figure 4. Notice that this work has not been reviewed yet and there are known bugs, for example with overlapping elements (hit testing not implemented) or position: fixed elements.

Various other scrolling bugs were reported, analyzed and sometimes fixed by Apple. The switch from overflow nodes to scrollable iframes is unlikely to address them. For example, the “Find Text” operation in iOS has advanced features done by the UI process (highlight, smart magnification) but the scrolling operation needed only works for the main frame. It looks like this could be fixed by unifying a bit the scrolling code path with macOS. There are also several jump and flickering bugs with position: fixed nodes. Finally, Apple fixed inconsistent scrolling inertia used for the main frame and the one used for inner scrollable nodes by making the former the same as the latter.

The CSSOM View specification extends the DOM element with some scrolling properties. That specification indicates that the element to consider to scroll the main view is document.body in quirks mode while it is document.documentElement in no-quirks mode. This is the behavior that has always been followed by browsers like Firefox or Interner Explorer. However, WebKit-based browsers always treat document.body as the root scroller. This interoperability issue has been a big problem for web developers. One convenient workaround was to introduce the document.scrollingElement which returns the element to use for scrolling the main view (document.body or document.documentElement) and was recently implemented in WebKit. Use this test page to verify whether your browser supports the document.scrollingElement property and which DOM element is used to scroll the main view in no-quirks mode.

Nevertheless, this does not solve the issue with existing web pages. Chromium’s Web Platform Predictability team has made a huge communication effort with Web authors and developers which has drastically reduced the use of document.body in no-quirks mode. For instance, Chromium’s telemetry on Figure 3 indicates that the percentage of document.body.scrollTop in no-quirks pages has gone from 18% down to 0.0003% during the past three years. Hence the Chromium team is now considering shipping the standard behavior.

Figure 3: Use of document.body.scrollTop in no-quirks mode over time (Chromium's UseCounter)

In WebKit, the issue has been known for a long time and an old attempt to fix it was reverted for causing regressions. For now, we imported the CSSOM View tests and just marked the one related to the scrolling element as failing. An analysis of the situation has been left on WebKit’s bug; Depending on how things evolve on Chromium’s side we could consider the discussion and implementation work in WebKit.

Related to that work, a new API is being proposed to set the root scroller to an arbitrary scrolling element, giving more flexibility to authors of Web applications. Today, this is unfortunately not possible without losing some of the special features of the main view (e.g. on iOS, Safari’s URL bar is hidden when scrolling the main view to maximize the screen space). Such API is currently being experimented in Chromium and we plan to investigate whether this can be implemented in WebKit too.

In the past months, The AMP Project and Igalia have worked on analyzing some interoperability issue and fixing them in WebKit. Many improvements for frame sandboxing are going to be available soon. Significant progress has also been made for frame scrolling on iOS and collaboration continues with Apple reviewers to ensure that the work will be integrated in future versions of WebKit. Improvements to “root scrolling” are also being considered although they are pending on the evolution of the issues on Chromium’s side. All these efforts are expected to be useful for WebKit users and the Web platform in general.

Last but not least, I would like to thank Apple engineers Simon Fraser, Chris Dumez, and Youenn Fablet for their reviews and help, as well as Google and the AMP team for supporting that project.